ColorGATE software solutions will run on nearly any PC hardware running a recent Windows, the minimal system requirements are met in the lowest cost segment, even tablets or Mini-PCs would be able to run and probably even be able to drive printers productively.

With higher productivity of printers and the ability to run multiple devices simultaneously one of the most frequently asked question is: “What PC specifications would you recommend?”

There is no definite answer to this, especially as nearly every customer runs a unique installation and printers are so diverse that the productivity range is from just a couple to thousands of square meters.

With the upcoming new CPU generation of Intel I9 (Skylake X) and AMDs new Threadripper series there will be a massive jump in end user CPU performance as the top model of the I9 for example has a whopping 18 cores and can run 36 threads simultaneously. This was a domain of server architecture until now.

Just having the maximum number of CPU cores is also not the answer to any performance issue. It helps, but you need to consider the speed of the CPU cores as well. Especially if you do not rip many jobs at once.

The following chart is the spec sheet for the current Intel CPU generation: 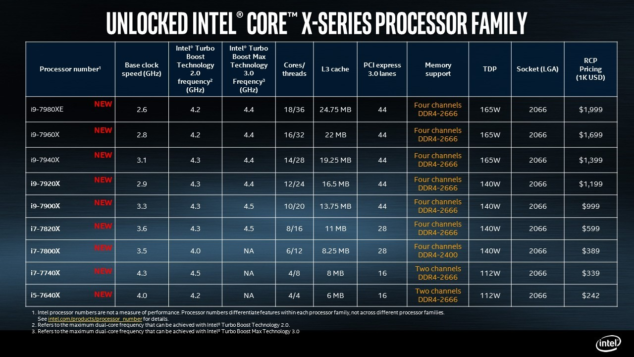 The relevant information is the base clock speed in GHz and the number of Cores/Threads. Ignore the Turbo Boost clock speeds as they are only relevant if only one or two cores are used. Even ripping a single file will utilize more than that.

For optimal performance in both single job ripping and parallel processing the I9-7940x would be our recommendation as the base clock is 3.1 GHZ and it has 14 cores. If single or dual jobs are the most common use case at customers the I9-7900X would be the weapon of choice.

The top model might be interesting if there is a lot of jobs to rip at the same time, however the significantly lower clock speed which would result in longer ripping time for single jobs compared to all other CPUs as they are all clocked higher.

16GB should be in it. More might help in the future.

As important as the CPU would be the harddrives. Currently we recommend SSDs but that is just one part. SSDs can be connected via SATA connection which limits the read/write speed to around 500 MB/s. This is the technical maximum of an SATA-III connection.

Another option and also my recommendation is using PCI-Express or NVME connection. These can get transfer speeds of more than 2GB/s. There are even solutions to combine them to RAID systems with nearly 10GB/s. Single SSDs are just a little more expensive than current SATA SSDs (approx. 500€ per TB) but the potential gain in RIP speed is massive.

As fast as you can, optimal speed would be 10Gbit/s.

Current PCs can easily produce 1GB of print data per second. The next CPU generation will increase that further. The data needs to be sent to the printer and/or stored on the RIP PC. All of the available components need to be able to handle this and the weakest component will determine the overall productivity of the complete workflow. It would not make sense to just buy a fast RIP PC and plug it into a single 1Gbit/s network. The transfer rate is not able to send more than 100MB of data per second.

Overall the required PC and network hardware need to work together and have capabilities to keep up with customer demands. We cannot specify THE perfect Rip PC but we hope that this advice helps in deciding which investment is the best solution for the current and near future requirements.